I am reviewing the HTML & CSS Is Hard website, which is an awesome resouce for studying HTML and CSS. It is easy to work through the examples with this window layout. The left window opens the website, the right top window is the Vim editor, and the right bottom browser window is a preview of the HTML file. 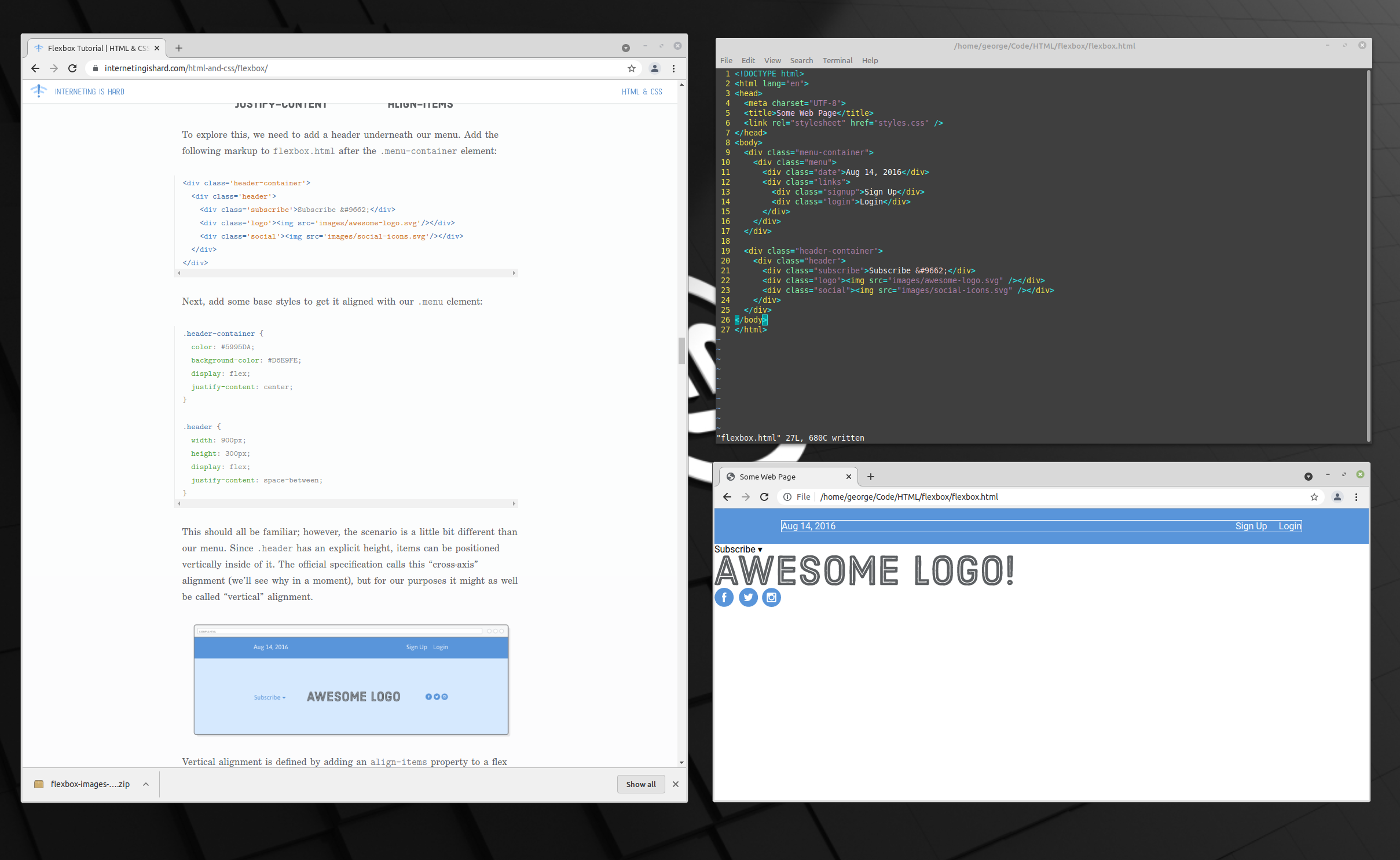 Some HTML/CSS rules are strange (at least to me). This post records some of them for future reference.

The CSS descendant selector is a blank between two selectors. For example, the code below p a selects an a element inside p. The second example below selects three elements with classes social, logo, and subscribe.

This just feels odd. If you do not pay attention, you would think they work the same, but they are totally different things. The CSS has a child selector like this li>a. It feels more natural than the descendant selector.

Some CSS property names are not easy to remember. Here are a list of some confusing names.

The responsive design mainly relies on media queries. The media query syntax is not very intuitive.

The logic behind width and max-width properties is interesting. The code below is an example. The element with box class will be 100% if it is less than 900px. The width will be 900px if it is larger than 900px.

The oddest terms in HTML/CSS probably are “art direction”. The author explains that “(you can) think of art direction as responsive image optimization for designers.”

All those three terms are used in HTML/CSS. The head is html tag that is inside html and before body. The term heading is not directly used as a tag name, and we call a section title
h1 heading or h2 heading. The header is an html 5 tag, and it usually refers to the section after navbar and before the main section of a webpage. Okay, my head hurts…

The web book is awesome and the examples are easy to follow. However, CSS itself is not easy to understand and write. The Web Typography chapter has a simple page which includes a typo.css file. It only contains some basic stuff, but it has 201 lines of code. Some lines are difficult to write if you are not very skilled at CSS.

That’s probably why the CSS frameworks are popular. Here is a list of awesome css frameworks. This website is itself built on the Bootstrap CSS framework. The awesome list does not include Skeleton, which is a nice minimal framework with ~400 lines of code.

Many CSS frameworks are not actually written in CSS. Instead they are written in SCSS, an extension language which includes some programming features. You can find more info on the sass-lang.com website. The Learn Sass page has nice examples showing the basics of Scss language.